« Back to Case Studies 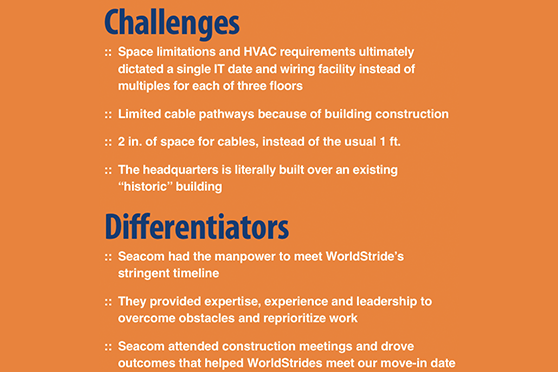 "Despite our extremely tight timeline, Seacom met target dates on all counts."

Seacom was hired to help WorldStrides during their relocation to downtown Charlottesville, VA in November, 2011. The Water Street building that WorldStrides was moving into was originally designed to be high-rise residential condominiums. Since the building wasn’t intended for commercial office space, and since it was constructed over an existing building on the site, conversion presented challenges to Seacom and the other contractors on the project.

The project had a very short timeline, and totaled 900 voice and data outlets and over 300 cubicle outlets, in addition to relocating four videoconferencing systems from their old offices. Seacom also installed multiple wall-mounted TV displays, added sound bars, and installed overhead projector systems and in-ceiling speakers in numerous conference rooms. In addition to very limited overhead space, the Seacom team had to deal with passing cable under as many as four large steel beams for each outlet. And because of space limitations, Seacom worked with a single IT closet on the first floor, where there would typically be a closet on each of the three floors.